My Little Buddy liked video games. He liked being indoors, doing familiar activities and mostly keeping to himself. Each week, I met him at his classroom and we walked down the hall to where the Big Brother’s activities were kept. I asked him what was something he did over the week, and what activity he’d like to do that day. ”Nothing,” was his usual response. Or sometimes, he shared a tidbit on the latest video game he was playing. When we got to the activities, he would crouch down silently, taking in the different board games before deciding on one and seizing it from the shelf. Trouble, Battleship, Uno, and Life all came, went, and repeated, usually in one-month spurts.

On one particularly gorgeous day, we were rummaging through the bin of activities and I saw a nerf football. Just one of those mini promo balls about the size of the palm of your hand. I asked him if he wanted to go outside and play catch. He immediately shook his head, no. Sensing his disinterest in a stereotypical athletic activity, I suggested we take the ball outside and play a game, a non-sports game. He looked at me sceptically, and I replied, “There’ll be no catching!”

When we got outside, I casually tossed the ball. It landed near the playground ahead of us and bounced and rolled awkwardly in various unanticipated directions. We watched it roll to a stop. “Huh,” I said and remarked how the ball went all over. Then I asked if he wanted to try. He declined so I retrieved the ball and tossed it again, underhand and towards the empty playground. The soft rubber hit a pole, bounced, rolled around on the bark mulch ground, then was still. Now my Little Buddy was ready to try. He grabbed the ball and said, “See if you can guess where it’ll go!” I tried, eager myself to see what would happen next. He tossed the ball and smiled.

It was carefree and random. Whatever athletic preconceptions and expectations he’d had with footballs we’d taken out of the equation. This was just play.

So we made up a game: pick a start location, stand there, throw the crazy nerf ball and see where it goes. Then we tossed different-sized pinecones (they were lying around the school yard) towards the nerf ball, and see how close we could get them to the nerf ball. We tried all sorts of variations, standing on the ladder up to the monkey bars, tossing through the swings, and navigating areas where there was lots of other equipment to bounce off. Sometimes we found all our pinecones lying on the bark mulch bed, sometimes we didn’t, and sometimes we found more than we thought we had originally thrown. It was an adventure that we got to create for ourselves, not competitive but compelling all the same.

What I had anticipated would be another enjoyable but routine morning of Trouble had taken an interesting turn. Now there were levels, twists, variety and challenges to reach. There was a social connection with opportunities for laughter and running with ideas as they struck us. It was our own little non-sporty, yet outdoors activity. Perhaps it even had some of the hallmarks of a good videogame.

If our story has inspired you, I encourage you to consider becoming a Big Buddy volunteer. Learn more here. 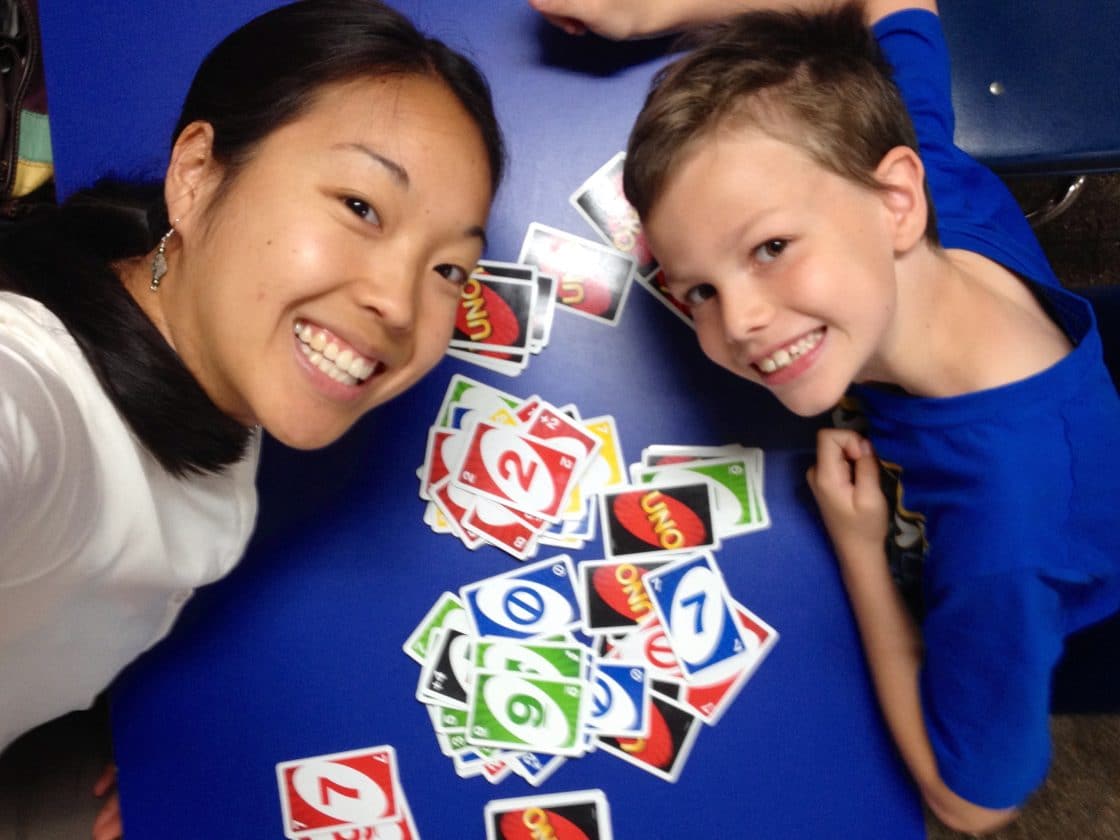