With the holidays just around the corner, many are beginning to think about the spirit of giving and volunteering in their community. The opportunities in the city are endless: soup kitchens, food banks, environmental clean ups and more. But one Vancouver-based charity encourages Volunteers to give back in a unique way; by having fun and leading by example.

Vancouver resident, Cameron Nevay, volunteers as a Big Brother with Big Brothers of Greater Vancouver, a mentoring agency which serves over 1,000 families each year across the Lower Mainland and Sea-to-Sky Corridor. The Big Brothers program matches adult male Volunteers with boys aged 7-14, who have little-to-no contact with a positive male role model in their lives. Cameron met his Little Brother, Dylan*, one year ago and the two quickly became close friends.

They share an enthusiasm for sports and video games, and spend a few hours together each week doing a wide-range of fun activities in their community. Dylan’s guardian, his grandmother, contacted Big Brothers of Greater Vancouver in 2013, looking for a way for Dylan to spend a little guy time with a caring adult mentor.

Skating, kayaking and golf are just a few of the activities Dylan loves doing with his Big Brother. Discussing a future outing they may take to get haircuts, Dylan declared, “I want to have my hair cut just like Cameron’s.” As winter approaches, the pair look forward to snowboarding again, and planning a fishing excursion for the spring.

Research is demonstrating the significant impacts that mentoring can have in a child’s life. A recent study by Big Brothers Big Sisters of Canada and The Centre for Addiction and Mental Health has shown that boys, who have a positive male role model in their life, are more likely to reach their full academic potential, have increased self-confidence and are far less susceptible to becoming involved with crime. 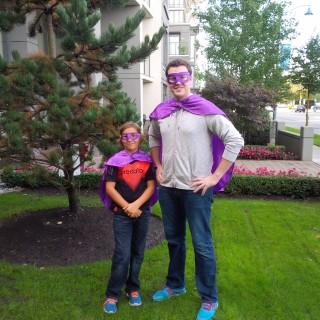 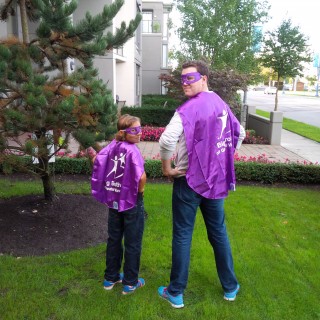 This fall, Big Brothers of Greater Vancouver is launching their very first superhero-themed campaign. The agency is encouraging all of their Big and Little Brothers to find their inner superheroes by performing acts of kindness together. The concept was inspired by one Big and Little Brother match whose year-end goal was to do one good deed for every fun activity they had planned. Their good deeds ranged from recycling bottles in exchange for treating themselves to a movie, to raising funds for a charity and running a 5km race.

Dylan and Cameron’s first superhero ‘mission’ of choice is to explore healthy eating options. Pizza, cookies and soda are Dylan’s favorite snacks. “To avoid overindulging in too many sugary foods, we decided to test our culinary skills,” says Cameron, “we buy fresh ingredients and make our own pizzas and healthy carbonated juices. Cooking is now one of our favorite activities to do together!”

Despite Cameron’s busy schedule, he mentions that it is easy to make time to see his Little Brother because it is such an important part of his life now. “It’s amazing and so fun to see Dylan build his conversation skills and become so confident when storytelling,” says Cameron. “Being a Big Brother is a great volunteer opportunity for anyone who wants to feel like a kid again, and make a difference in a child’s life. All you have to do is be yourself and lead by example.”

There currently are 97 boys waiting to be matched with a Big Brother across Greater Vancouver, and some may end up waiting up to two years before one comes along. For some, that wait is simply too long. Those interested in becoming a Big Brother or would like to learn more about the program can contact Rose at 604.876.2447 x 236 or apply online at bigbrothersvancouver.com.