Being a mentor to a child doesn’t have to be hard work. You don’t have to be a working professional at the peak of your career, a straight A student in university or college or come from a wealthy well-mannered family.  All you need is a good head on your shoulders, a thirst for having fun and a little bit of time each week to spend with a child who could benefit from a positive role model.

In addition to full-time studies and full-time work, Mirbagheri also volunteers at the Children’s Hospital and North Shore Stroke Recovery.  So where does this busy Graduate student find the time to volunteer as a mentor?

“It’s awesome just to hang out with him. It’s my favorite time of the week!” says Mirbagheri. “Before, I had a super regimented life, full time school, full time work, and studying.  With Adel, it’s a few hours a week of pure fun. It’s an awesome way to relieve stress and just be a kid.”

Amir and his Little Brother Adel have been matched for just over a year.  Their favorite activities include going to the arcade, walking around Granville Island, talking about cars and go-karting.  “I would never have the chance to go go-karting or play laser tag if it wasn’t for Adel,” says Mirbagheri. “Adel is so awesome and such a pleasure to be with.  We always have a good time.”

Rosa Aceves, Adel’s mother, says that she called Big Brothers because she felt like Adel needed to have a positive male role model in his life.  Since her separation from Adel’s father, Adel hadn’t had the opportunity to do much guy stuff.

“Adel is an only child and he really needed to have some time for male bonding, which is something that I couldn’t give him,” says Aceves, “Adel really looks forward to spending time with Amir because they can talk about cars and video games, and play sports and hang out.”

“I almost feel selfish sometimes because I’m having so much fun when we hang out,” chuckled Mirbagheri, “but then I realize that this is what it’s all about – fun.”

And the benefits go both ways.  Mirbagheri says that he’s learned a lot from Adel.  “I’ve learned how to loosen up and be a kid again.  He taught me patience and to take things more lightly. He is a lot like me when I was growing up.”

“Adel and Amir have been a great match from day one,” says North Shore Mentoring Coordinator for Big Brothers, Alana Haynes, “Amir and Adel share the same dedication to school and extra curricular activities. They’re always so excited to see each other.”

The North Shore is currently in need of volunteers for their school-based and community based programs. “We have many kids who are waiting for a mentor to spend time with and have fun with,” says Rogers.

When asked what advice he could give to someone considering volunteering as a mentor, Mirbaheri answered, “I would definitely recommend it. It’s one of the most fulfilling things that you can do. It’s great to build a relationship with someone.

You won’t know how much fun and how easy it is until you sign up. I definitely think that even if you are considering it, you should apply because it’s just so much fun.”

For more information on how you can get involved, call Big Brothers of Greater Vancouver at 604.876.2447 ext. 236 or visit their website at bigbrothersvancouver.com 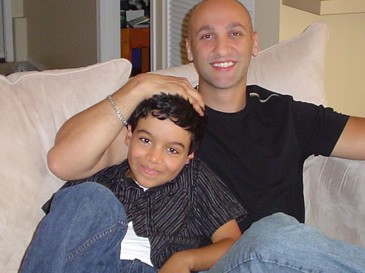 “Amir and Adel share the same dedication to school and extra curricular activities. They’re always so excited to see each other.”