Seeking a way to give back to her community, Richmond-resident, Stephanie decided to put her words into action as an In-School Mentor with Big Brothers of Greater Vancouver. Every week over the course of the year, Stephanie and her Little Buddy enjoyed a range of games and sports activities that built a close friendship, the impact of which she would only understand at the end of the school year.

Stephanie met her Little Buddy, Peter*, last November and was initially nervous that she wouldn’t be a good mentor. Any doubts Stephanie harbored about the potential of their friendship were quickly diminished by Peter’s excitement in their first hour together. The immediate desire he had to share his enthusiasm for sports with his new mentor made their bonding process very easy.

Each week Stephanie and Peter tried a new sports activity together, including hockey, football and badminton. On days when they could not be outside dues to bad weather, they enjoyed card games, Hungry Hungry Hippos, and baked cookies for Peter’s classmates. Stephanie feels incredibly happy when she thinks about how proud Peter was when presenting the class with their treats. Receiving praise from those around him for his accomplishment allowed Stephanie to see his confidence grow in leaps and bounds.

With her company’s support, Stephanie has been able to take an hour off each week to volunteer at Peter’s elementary school, which is two blocks from her office. This has enabled her to engage with her passion of giving back to the community during the workday. The one-hour of fun each week outside of the office, spent playing games and sports enabled Stephanie to recharge and feel more productive upon returning to work.

At the end of the school year, Stephanie said goodbye to her Little Buddy for the summer as they enjoyed a final game of basketball in the playground. Stephanie felt emotional as they finished their game and Peter told her he would miss their time together. With a lump in her throat, she realized that the small time commitment she gave to Peter each week had made much more of a positive impact on him that she could ever have imagined.

A young boy who would only talk about sports at the beginning of their friendship, left his mentor as a more confident, personable and prepared 10-year-old for the exciting adventure that grade six looks to be. With Peter changing schools at the end of the year, the match naturally came to a close. Stephanie is very excited to become a mentor for the second time, this time she will be matched with a girl who shares Stephanie’s love of arts and crafts.

If you are inspired by Stephanie’s story, you can learn more about becoming an In-School Mentor with Big Brothers of Greater Vancouver at bigbrothersvancouver.com or call 604.876.2447 x 236.

*For the safety of the children served by Big Brothers of Greater Vancouver, names have been changed for anonymity. 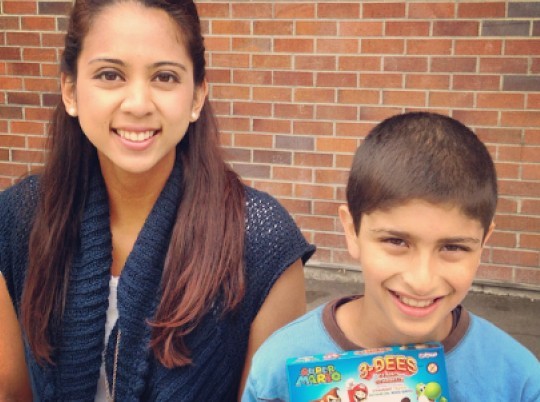 With her company’s support, Stephanie has been able to take an hour off each week to volunteer at Peter’s elementary school, which is two blocks from her office. This has enabled her to engage with her passion of giving back to the community during the workday.