How Big Brothers Helped My Family

UPDATE June 29, 2017 – Chris and Peyton are still matched, going on almost seven years now! Chris and Peyton continue to be a great match, continuing to grow, and have fun together even now!

Taking the first step can be the hardest part, but when you finally take that chance it can be the most rewarding decision you’ve ever made. Tabitha, a single mom living in Vancouver, was hoping to find her son, Peyton, a supportive and positive male role model.  She had known about the Big Brothers program for some time but getting her son involved with Big Brothers made her hesitant, anxious and nervous.  Similar to many mothers who decide to enter the program, questions like “Will it workout?” and “What if the match isn’t a right fit?” came to mind.  After much thought and deliberation she finally made a decision to give the program a try.

Three years later, Tabitha couldn’t have been happier with her decision to find Peyton a Big Brother mentor. Peyton entered the program when he was nine. Now 12 years old he is still matched with his Big Brother, Chris Palliser. When Chris was in his early twenties, he started off as an In-School Mentor with the Fort McMurray office of Big Brothers Big Sisters. When he moved to Vancouver and got a gig at the popular radio station, The Beat 94.5, he decided to continue volunteering as a mentor in the Big Brothers Program.  Tabitha remembers when meeting Chris for the first time she instantly had a good feeling about him. 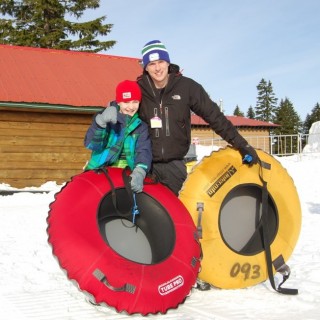 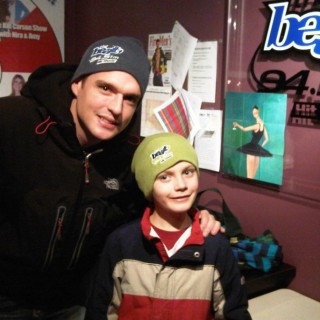 Tabitha realizes there is only so much a mother can bring and the positive male energy Chris brings into Peyton’s life has surpassed anything she could have ever imagined.  Chris makes every effort he can to spend time with Peyton each week.  Since Peyton was young one of his greatest passions was trains. One of the most recent adventures the pair had was a trip to the Vancouver train tracks.  Tabitha recalls the joy in her son’s eyes when he came back full of stories, a new hard hat, a pair of gloves and the train’s schedule.  Due to Chris’ outgoing nature, Peyton had the opportunity to chat with the switchman in charge. Chris’ large personality compliments his Little Brother’s shy and reserved nature, which explains why the friendship has lasted for so long.  Together these two have been able to do so many other different activities, including laser tag, enjoying a Canucks game, and swimming. Peyton was even able to share a very memorable occasion when Chris married his beautiful wife Heather.

Tabitha looks back at the three years since Chris and Peyton were first matched and she has witnessed the growth in their friendship and their amazing ability to learn from each other.  She sees how Chris’ mentorship has had such a positive impact on Peyton.  Both Chris and Peyton truly get a chance to break free from all that life throws them and just relax and have a good time!  “One of the biggest lessons a mother can learn from my experience,” says Tabitha, “is to simply give the program a try for your son”. Big Brothers’ number one priority is to maintain the highest standards of child safety practice in order to deliver safe, quality mentoring programs to children and youth.  If Tabitha’s story has inspired you to learn more about the Big Brothers programs please contact our Family Intake Coordinator, Carrie Prime, at 604-876-2447 x 222 or email carrie.prime@bigbrothersbigsisters.ca.