Investing in Kids’ Futures Pays off in Hard Dollars 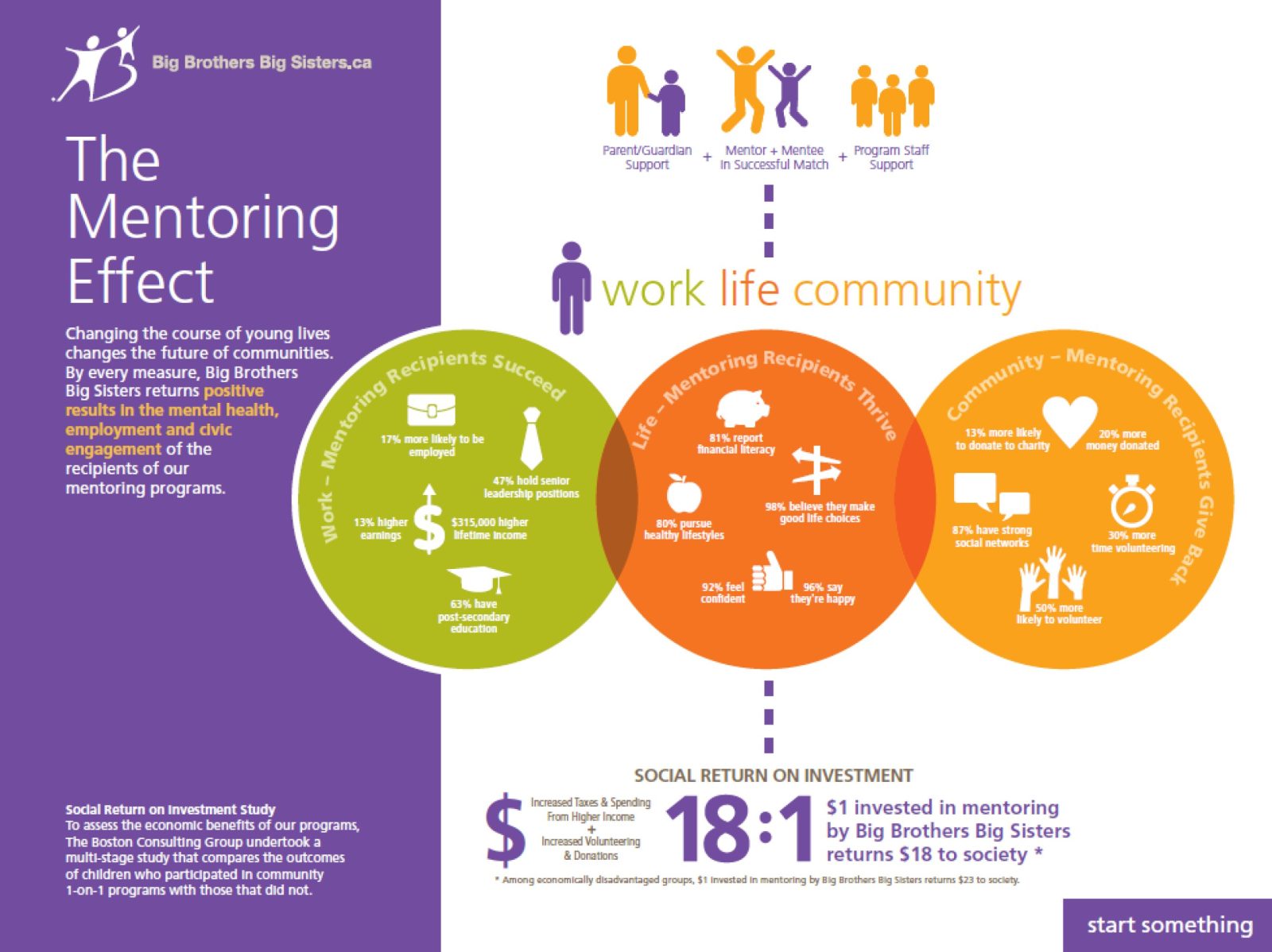 The research compared the life outcomes of 500 former Little Brothers and Little Sisters with a control group of individuals from similar family and economic backgrounds who did not have a Big Brother or Big Sister to mentor them as children. The study found that, over their working lives, the former “Littles” will earn on average $315,000 more than those in the control group.

“The BBBS Social Return on Investment Study was designed to audit the financial return to society from Big Brothers Big Sisters,” said James Tucker,  a partner in Toronto at BCG, who led the research project. “We found tremendous financial value generated through higher taxes and higher spending due to increased income and increased charitable donations in time and money. Big Brothers Big Sisters mentoring programs generate an average social return on investment or SROI of $18 for every dollar invested.”

For the most economically disadvantaged participants in BBBS mentoring programs the impact is even higher with an average, SROI of $23 for each dollar invested.

Each former Little Brother and Little Sister involved in the research project is on track to generate an average of $32,154 in additional tax revenue; $49,819 in increased consumption; $5,856 in additional charitable volunteering and $890 in greater charitable giving. The average investment required to mentor a Little Brother or Little Sister over the average duration of a Big/Little match is $5,059.

“Collective action is needed to change the trajectory of young lives,” says Bruce MacDonald, President and CEO of Big Brothers Big Sisters of Canada. “This study is sending a powerful message: the private sector, governments and individuals can support BBBS mentoring programs knowing that their investments will have a transformative effect on young lives and yield robust long-term financial returns and societal value.”

The idea of collective action to invest in the future of boys and girls in need of guidance through BBBS programs is gaining strength.

Standard Life, a sponsor of Big Brothers Big Sisters since 2009, has renewed its commitment with an investment of $1.125 million over the next five years. The funds will go towards recruiting more volunteer Big Brothers and Big Sisters.

“Many causes are worthy of our support. We now have the proof that mentoring with Big Brothers Big Sisters does much to improve the quality of life in our society,” said Sophie Fortin, Senior Vice-President, People, Business Change and Communications, Standard Life Financial. “We’re in the business of investing for the long term. We’re proud of our commitment to the future of young Canadians and the positive effect it has on the health of our communities. This is truly one of the most satisfying investments we can make.”

Boston Pizza, a new corporate sponsor, has also made a five-year pledge to invest a minimum of $1.5 million in BBBS mentoring programs.

“We see the impact and benefit of strong mentorship in our restaurants every day as more than 22,000 young people are employed at Boston Pizza restaurants from coast-to-coast,” said Cheryl Treliving, Executive Director of the Boston Pizza Foundation. “This study confirms the importance of role models and mentoring, as well as the long-term impact we can have on the lives of individuals and on the health of our country and workforce.”

The Government of Canada through the auspices of Citizenship and Immigration Canada is investing $1.6 million in BBBS over three years. The funds are dedicated to establishing programs to serve the mentoring needs of immigrant youth.

“The Government of Canada is committed to helping newcomers succeed and prosper in their new home,” said Citizenship, Immigration and Multiculturalism Minister Jason Kenney. “We are proud to partner with Big Brothers Big Sisters of Canada to help immigrant youth integrate into their new school and community through this mentorship program.”