Darelle to Donate $1 for Every New User: #DriveTo25 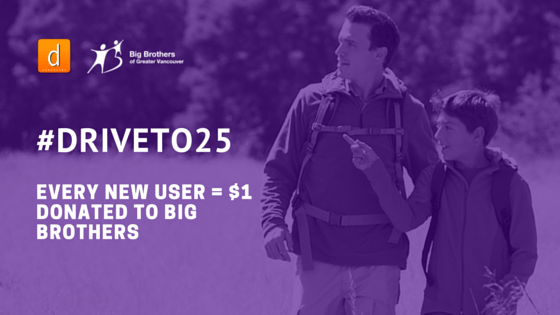 For two weeks starting Monday June 29th, darelle is running the #DriveTo25 fundraising initiative in order to introduce their new online marketplace. Since giving back is such a huge part of darelle, they’re kicking things off by donating $25,000 to the charities that their community of users recommend.

darelle will donate $1 dollar for every new user of their site to the eligible charity of your choice (yup, that includes Big Brothers!). All you need to do is register and join a ‘Buy Request’ (no purchase necessary). Each new user will also be entered to win one of two $500 Gift Cards. Their goal is to donate $25,000.

Don’t miss out on this exciting Fundraising Drive with darelle.com happening until July 12! Help Big Brothers raise funds by simply telling darelle what kinds of deals you’d like to see on their online marketplace. Think of it like one of those group coupon sites, except you get to tell darelle what kinds of deals you want and from who (aka a Buy Request). If enough people submit a similar Buy Request, darelle will work with local businesses to make it happen for you! The best part is, you can put in requests but you aren’t obligated to purchase. Win for you, win for Big Brothers!